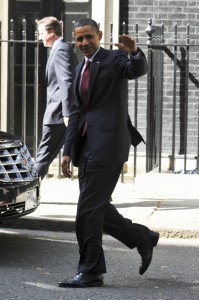 He says that he wants to quit, but in his own words, according to USA Today’s website, "I constantly struggle with it" and "there are times when I mess up". Then, he goes on to say, "I don’t do it in front of the kids." I wonder if there is a smoking room in the White House, or does he just step outside?

I’m thinking that a really smart person like Obama, if he really wanted to quit smoking, he could do it. Seriously, lots of people have done it, either by using sheer willpower, a medical intervention such as the patch, or through hypnosis.

I think that President Obama should see a good hypnotist. What do you think?

This entry was posted in Uncategorized. Bookmark the permalink.