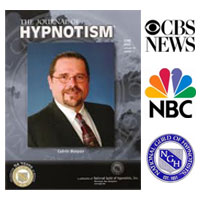 Thanks for visiting our website. Let me tell you a little bit about myself.

I first became interested in hypnosis as a child, when listening to my grandmother tell me stories about her brother, my Uncle Ward who was a hypnotist. That turned out to be the beginning of a lifelong interest in psychology, philosophy and theology, which has resulted in my professional career in hypnosis.

I know some of you want to know more so please read on.

Cal Banyan on the Radio

Cal Banyan is also an instructor, consultant, author and public speaker on the following topics: hypnosis, hypnotherapy and working with emotions for control of addiction, overcoming chronic illness and personal achievement.

One of the most sought after and qualified hypnosis instructors with a background that ensures quality for those who want to train with one of the best in the field of hypnosis. Here is a partial list of my acomplishments: 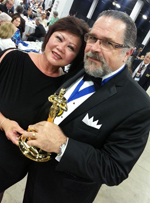 He received his B.S. and M.A. degrees in Psychology at the University of North Dakota.

He has worked as a Psychologist at the North Dakota State Hospital, and with Lutheran Social Services as a Family Hypnotist.

Mr. Banyan has published in the following scientific, professional and popular publications:

Yep that's me. I'm about 290 pounds there and I thought that I would eventually explode, because I just kept gaining weight. Then, I became my own experiment and applied what I had been learning from my clients (while they were in hypnosis) to myself. I used this unique understanding of food addiction and hypnosis on myself. Now, I've lost over 60 pounds to date (1/2001) and continue to become slimmer.

I learned how to beat the fattening compulsion of eating out of emotions like boredom, stress, anxiety, frustration and just being tired.  Now I lose weight and I never feel hungry or deprived!

Questions? Give us a call.

As Seen On TV & Heard On Radio

Cal Banyan on WB 11 KPIX-TV New York as he demonstrates hypnosis to a local hypnosis group in New York, and gives Toni Senecal (TV Personality) and Pat Ivers (Producer) a copy of his new book! They said that they had a wonderful time and everyone learned a lot about hypnosis! Click here to see the latest advanced hypnosis grads in New York.

New Newspaper Article on The Secret Language of Feelings

Click on the graphics on the left to read the article. Then click here to learn more about Banyan's new book. The Secret Language of Feelings: A Rational Approach To Emotional Mastery, informs the reader how to start making sense of this secret language that resides inside all of us.

This language it trying to communicate with each of us so that we can be happier and more successful in life.

The leading international magazine for speakers, large meeting planners, trainers and seminary leaders has reviewed Calvin Banyan's new book and says, "The Secret Language of Feelings, is a fresh look at emotions and how they affect you."