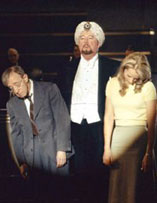 “Hypnosis, or some sort of trans inductions, has been around for thousands of years,” says Norman West, a clinical psychologist who often uses hypnotherapy in his practice. Though the entertainment industry may have portrayed hypnosis as a means of getting people to act goofy onstage, its effects are far more productive when used therapeutically, says West.

Hypnosis also is being used in medical situations, including childbirth and surgery. In those cases, hypnosis generally is used to calm the patient and reduce anxiety.

Several studies, including ones done by the University of Florida and the British Journal of Obstetrics and Gynecology, showed the pregnant women who used hypnosis had shorter and easier labor, needed less pain medication and suffered lower incidents of post-partum depression.

Classes on how to utilize hypnosis during childbirth are offered in Chattanooga. Hypnobabies Childbirth Hypnosis, a method of childbirth preparation that teaches hypnotic techniques, imagery and visualization, helps moms — in the absence of complications — to experience “comfortable, shorter, easier births,” according to chattanoogahypnobabies.com.